As if #Donald #Trump hasn’t been bad enough for the #Republican Party, now #Jeb #Bush is rubbing it in.

Well my dear #Americans, this is the millennia and if ever there is a more heinous way of saying I will increase your taxes ten fold and keep inflation going, then this is it. This is what Jeb Bush has just done by saying, “people need to work longer hours and through their productivity gain more income for their families.”
Common knowledge is: putting in more time at work does not translate into heft pay check. By working more, every single American will be paying out more tax than beefing up their take home package. In fact, working forty hours a week means – a full day in a working week might not even be enough to cover your expected weekly rate of tax.
Working too much is already tearing American families apart. Making them pull their finger nails out without addressing rising inflation cost will be hell for them. Not only does it push them deeper into debt, it condemns them to living a life of #debt #slavery – with no proper healthcare and insurance cover.
Debt own the young and students in America already, but to mortgage a whole family into debt/work bondage is un-American. It is heartless and against all #Christian values.
As for the #middle class that the #Democrats seems to be shouting about, well, the game is like having a blind person lead an elephant through a square ring. If the elephant’s tusk doesn’t overreach to knock over the fence, its tail would.
If greed is deemed to be good, then the best thing the next President should do is focus on those companies the American public bailed out recently. Time is right to see how well we lead the way into millennia economy. And that is what my type of President will do.  Sincerely Yours, Pilgrim Smith. 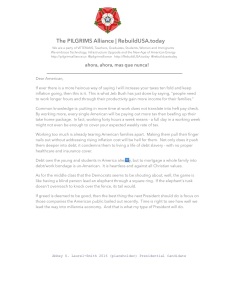 Come on down! Come set up your FLOW with us!
A virtual bank that is changing the way we bank one step at a time. Anyone and everyone accepted. Sign up.
Trust in me to ReBuildNewYork